If you think robots are about to take over the world, I’ve got a great cannabis stock for you.

This early industry leader is leveraging the power of robotics and automation to develop some of the most innovative cannabis manufacturing equipment I have ever seen.

The company’s flagship product is a highly engineered machine that helps cannabis producers quickly and cost-effectively extract oil from the cannabis plant.

If it catches on, this young cannabis company could grow into an industry pioneer and global leader.

Shares began trading on the Canadian Stock Exchange in February of 2017 under the ticker symbol QCC. I see average daily trading volume of 784,000 so this ticker is plenty liquid for 99% of regular investors.

I also see a US OTC listing under the ticker symbol QUDCF. I see much less liquidity here with average daily trading volume of 51,000. But that volume should still be adequate for most investors.

Here’s why QCC grabbed my attention.

The company makes a specialized cannabis oil extraction system that makes it easy and more profitable to produce cannabis oils.

Its flagship product is the BOSS CO2. Check out this amazing piece of machinery below. 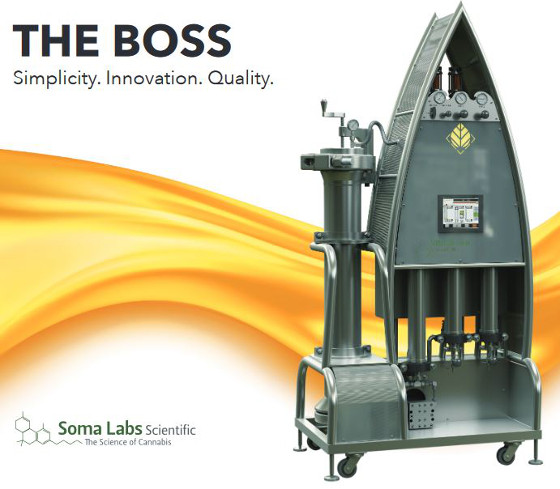 This is some of the most sophisticated cannabis production machinery I have ever seen.

It tells me the production process is quickly becoming more advanced. That is good.

And it solves a major problem in the cannabis industry.

As it stands, there is no industry standard for extracting cannabis oil. Every cannabis company builds its own home-grown oil extraction system, which is both cumbersome and expensive.

The BOSS provides a plug and play solution that is highly engineered and specifically designed for one function – extracting oils from cannabis plants.

BOSS is still in its very early stages. QCC is currently taking pre-orders, but it has yet to be commercially released so this product has not produced any revenue. I’ll be watching closely for the next few months for updates on new sales.

I think the BOSS machine has a lot of potential. But even if the product falls flat, QCC isn’t a one-trick pony.

With these three divisions targeting three different segments of the cannabis industry, QCC has the feel of a cannabis conglomerate – a company involved in multiple sectors to diversify its business.

In early January QCC reported results for the last fiscal six months and for such a young company the numbers look pretty solid.

These numbers tell me that QCC should be able to produce annual revenue of close to $2 million in the near future.

With a market cap of just $22 million, this stock’s price to sales ratio of 11X is still a little high compared to the broader stock market, but within the cannabis sector where a lot of stocks are trading with super high P/S ratios, that 11X sales are relatively low.

If QCC hits a home run with BOSS, I would expect to see big sales growth.

QCC has traded in line with the broader cannabis sector.

Shares rallied pretty big in the fall of 2017 but ran into some weakness in January. Despite the pullback, QCC is still up 135% since early September.

QCC is still an early stage cannabis company. The BOSS machine looks promising but it still needs to deliver revenue.

QCC is a classic pick and shovel play in the cannabis sector. The BOSS extraction machine looks promising. If it catches on, QCC would be in position to be an early industry leader in a highly specialized cannabis sub-sector – cannabis production machinery and systems.