On a bustling stretch of Santa Monica Boulevard lined by vintage stores and eateries, the MedMen shop looks right at home.

It’s a retail scene reminiscent of an Apple store, but the high-tech gadgets on sale are vape pens.

After years of bullet-proof glass and burglar bars, marijuana shops are starting to get a makeover.

“There is no statute that requires tinted windows or bars.”

Cannabis entrepreneurs, borrowing from successful retailers such as Apple and Whole Foods, are opening dispensaries with natural light, spacious displays and open-floor plans. With weed now legal for recreational use in California and seven other states, such amenities could attract an anticipated glut of new customers who are less familiar with cannabis and may be put off by the industry’s generally dingy shopping experience.

There is an “upscale revolution in cannabis retailing,” said Troy Dayton, chief executive of Arcview Group, a marijuana research and investment firm. “It now makes sense to invest in your property and make it awesome for the long haul.”

As more states ease restrictions on marijuana for medical and recreational use, pot is losing its stigma — bringing new consumers into a legal market forecast to grow to $50 billion in 2026 from $6 billion last year, according to a report from Cowen & Co.

The biggest source of potential growth is older customers who have disposable income but are more reluctant to patronize the types of shops that have traditionally sold marijuana, said Vivien Azer, a managing director at Cowen who analyzes the cannabis industry.

“The guy ripping bong hits every day is not buying higher-end,” Azer said. “It is women and wealthier consumers that under-index for cannabis use” — representing a huge potential market ripe for a retail experience, she said, that is less “drug dealer” and more “legitimate.”

MedMen co-founder and Chief Executive Adam Bierman has a nickname for what he considers the biggest untapped demographic: “the Chardonnay mom.” These are well-to-do customers who don’t currently use pot, but might be introduced to it by friends at a party or peek in while walking past an attractive boutique.

“They see this store and say, ‘Oh, I’ll try those breath mints,” Bierman said. “They start becoming someone who is substituting marijuana for alcohol or something else.”

The company also manages growing and manufacturing operations, including a dispensary and cultivation facility in L.A’s Sun Valley neighborhood. Cultivation facilities are in the works outside Reno, in Desert Hot Springs and in Utica, N.Y. (MedMen is managing four dispensaries in New York, including one in Manhattan.) But key to its success is an in-store experience that offers the same operational savvy and attention to detail common in more “vanilla businesses,” Bierman said.

“There is no statute that requires tinted windows or bars — it’s because of that feeling that this is an illicit product,” Bierman said.

Co-founder and Chief Operating Officer Andrew Modlin said he looked to retailers such as Apple and even restaurants for ideas.

Instead of queuing up, shoppers are encouraged to browse the store on their own. Against one wall, refrigerators contain edibles such as marijuana-infused lemon bars. On the other, open shelves and hooks hold a variety of products, including cannabis patches for pets.

On custom-built wooden tables, cannabis strains are displayed in clear circular containers — dubbed “bud pods” — with built-in magnifying glasses allowing for closer inspection. By pulling a small tab. shoppers can take a sniff (Modlin said sanitation is his pet peeve at old-school dispensaries, where customers shove their hands into open jars of product). Each pod is stealthily secured by a cable, like the laptops at an Apple store. 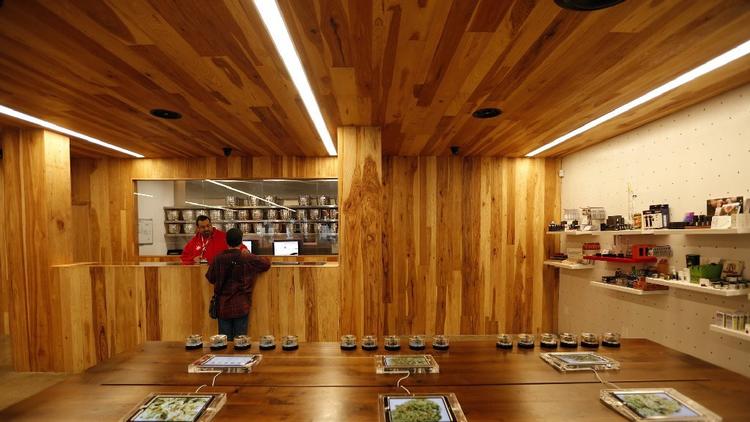 The processing room, where gloved employees prepare orders from shelves of stainless steel bowls, is sheathed in clear glass similar to the open kitchens at trendy restaurants such as Trois Mec and Bestia.

“I have been in so many dispensaries, and you go into the back and there are bags of product on the floor and a used bong right next to it,” Modlin said. “That’s not the environment we want to create.”

Retail analysts said weed entrepreneurs are embracing a strategy familiar to anyone who has spent $5 for a cup of coffee: it’s easy to persuade shoppers to spend more at a store with upscale ambiance. Creating an attractive retail experience will become increasingly vital as marijuana prices drop in coming years as more growers jump into the market.

“I’m more inclined to go to a store that looks better,” said Ron Friedman, a retail expert at Marcum in Los Angeles. “It’s more than just going in to buy a product, it’s creating an environment where somebody enjoys just being in the store.”

Shoppers at MedMen such as Ira Levine, a 64-year-old editor and writer, is happy the industry is moving past security doors and fluorescent lighting.

“It’s a legal product — this is how it should be,” said the MacArthur Park resident, who spends about $400 every two weeks on pot to help relieve symptoms from a nerve condition.

Some pot entrepreneurs are eyeing older Americans as a prime business opportunity.

Ray Taylor, who opened the Healing Center in March in San Diego, initially expected the majority of customers to be “young stoners, the 20-year-olds looking for a buzz, the Rastafarians.” Instead, he said, about 60% of his customers are age 40 and up. 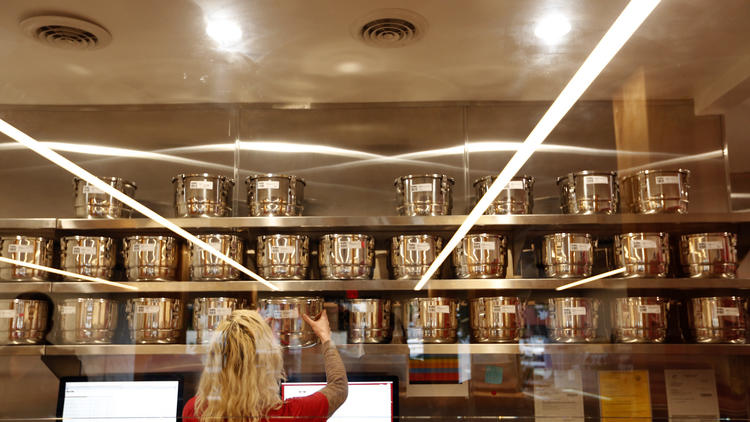 “Most of them are professionals, your normal everyday people you see at Vons grocery store,” Taylor said.

Inspiration to open a “decent” pot shop came after Taylor brought a relative with epilepsy to a dispensary that he thought looked unsafe.

He leased a storefront in a building owned by a pain management doctor who now send him referrals. Taylor rakes in an average of $15,000 in sales a day, he said. He’s looking to expand into the space next door and hopes to start giving presentations at nursing homes and senior living facilities on the medical benefits of pot.

“Seniors and people in that category are going to start using it more and more,” he said. “I think there is a huge market.”

Taylor attributes part of the store’s success to its look — a mix of silver accents, a purple wall inspired by his favorite Rainbow Kush bud, and the feel of a bakery. He ended up hiring High Road Design Studio, a design firm that specialized in pot shops, to make over the 335-square-foot space.

“I want it to be the Rolls Royce of dispensaries,” he said. “I didn’t want to open a psychedelic orange place with posters.”

For years, dispensaries had a signature look of tinted windows, security doors and sometimes graffiti murals. A green cross outside was often the only clear sign of what was sold. Operating in a legal gray area and serving a demographic consciously seeking out their wares, few opted to sink money into aesthetics.

Many shoppers, such as Jonathan Smith, 30, remain partial to these no-frills stores. The West Hollywood resident said he cares much more about quality and price, and would feel uncomfortable in a dispensary that caters to a wealthier clientele.

“If you’re someone into the L.A. lifestyle, with money, of course you’d want to go somewhere nice,” Smith said. “If you’re a regular Joe, you’d feel kind of out of place.”

Megan Stone, the owner of High Road, said she started the pot-specific design firm in 2013, the year after Colorado and Washington passed bills legalizing recreational pot use. Stone had worked as a “budtender” at a Santa Ana dispensary while she went to design school. After becoming general manager, she got the chance to do a low-budget remodel, replacing the carpet with wood-like vinyl and painting the walls a dark brown, a nod to high-end jewelry stores and clothing boutiques, she said.

Those few changes thrilled customers — burnishing the shop’s reputation and enabling it to charge premium prices.

“People used to walk in and call us the Tiffany’s of dispensaries,” she said. “When the bar is set so low it takes very little effort to have a dramatic impact on people’s perception.”

Her design business has grown to about 15 clients last year from three in 2014, Stone said. This month, she hired a design assistant to help with the workload.

Stone said she’s seen the industry — and her clients — evolve from mom-and-pop shops to multi-store chains with more investment backing. That’s just par for the course for an industry that has become increasingly sophisticated as it emerges from the shadows, she said.

“The future of this industry is geared toward a demographic that looks like mainstream society,” she said. “It looks like the customers at Starbucks or Whole Foods or Apple.”

Source: Marijuana Shops Are Trying to Look Like the Apple Store