In case you missed it: During Bill Maher’s 37-minute interview with President Obama on Friday night’s Real Time, Obama all but conceded that federal prohibition could begin to crumble if all five states voting on adult-use cannabis legalization were to approve the measures. 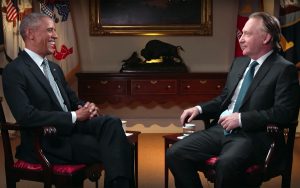 The good stuff starts at around the 10:00 mark. Here’s the money quote:

“The good news is that after this referenda, to some degree it’s going to call the question. Because if in fact it passed in all these states, you’ll now have a fifth of the country that’s operating under one set of laws and four-fifths in another. The Justice Department, DEA, FBI, for them to try to straddle and figure out how they’re supposed to enforce laws in some places and not in others, they’re going to guard against transporting these drugs across state lines – you’ve got the entire Pacific Corridor where this is legal. That is not going to be tenable. It’s not something that I think is going to happen overnight. I think their are some legitimate concerns that people have about how you draw lines on these issues, but it is indisputable that right now the biggest drug crisis we have is with opioids, many of which are legal and are ravaging entire communities all across the country. For us to re-sort how we think about these problems and not think of everything through the criminal justice lens, but also through the public health lens, I think is something that’s going to need to happen.”

The post Obama: Prohibition ‘Not Tenable’ If States Legalize Cannabis on Tuesday appeared first on Leafly.