What’s in the report, Jeff? Does it not say what you thought it would say?

Sessions may have assumed the task force would give him cover to come after legal cannabis. But what if it didn’t?

For nearly a week, cannabis and judicial reform advocates have been awaiting a report from the Justice Department’s Task Force on Crime Reduction and Public Safety.
That’s the group Attorney General Jeff Sessions established on Feb. 27 to “identify ways in which the federal government can more effectively combat illegal immigration and violent crime, such as gun crime, drug trafficking, and gang violence.”

Included in the task force was a subcommittee looking specifically at cannabis laws.

Sessions ordered the task force, the members of which were never formally revealed, to report their findings to him no later than July 27.

To be fair, it’s been a busy week for the Trump administration. There was the Jared Kushner hearing; the Boy Scout speech; Anthony Scaramucci’s exegesis on Steve Bannon and auto-fellatio; the defeat of Skinny Repeal on the Senate floor; the firing of Reince Priebus; and the Monday third act show-stopper, The Sacking of The Mooch. Meanwhile, a number of senators developed hand cramps writing letters to save the job of AG Sessions, who sent himself to El Salvador for most of last week.

You know that move where you duck below your boss’s sightline when he’s mad at you? Jeff Sessions hopped a military transport to Central Fucking America.

What’s This All About?

The DoJ task force has been shrouded in secrecy for months. We do know it’s co-chaired by Steve Cook, an assistant US attorney in Tennessee; and Robyn Thiemann, a deputy in the Justice Department’s Office of Legal Policy. The marijuana subcommittee is led by Michael Murray, counsel to Deputy Attorney General Rod Rosenstein. Beyond that, we know nothing about it.

‘It’s difficult to ascertain any clear information about the subcommittee.’

“It’s difficult to ascertain any clear information about the subcommittee and how they’re working,” National Cannabis Industry Association deputy director Taylor West told US News reporter Steven Nelson earlier this year. And yet Sessions claims to be basing major policy decisions on this secret committee’s recommendations.

It’s also unclear to whom the task force members are talking—if anybody. When Rep. Dana Rohrabacher (R-CA), one of President Trump’s most ardent supporters, tried to meet with Sessions about the task force and cannabis, Sessions told him to go Mooch himself. Okay, not true: Sessions’ office politely declined the request. But the effect was the same.

Let me float a theory here. Sessions ordered up that task force on the same principle that guides trial lawyers: Never ask a question to which you don’t know the answer. He probably assumed the final report would give him cause to ramp up mandatory minimum sentences, and civil asset forfeitures, and marijuana crackdowns.

But what if it didn’t?

Sessions has said he will “act upon recommendations” from the task force “as they become available.” So he’s renewed the federal push for mandatory minimum sentences. He’s reinvigorated the use of civil asset forfeitures, a long-discredited tool that even conservative institutions like the Heritage Foundation find odious and counterproductive. But he has not presented any evidence or arguments put forth by his task force to justify those moves. Which he’d do if he had the evidence, wouldn’t he? Wouldn’t you?

I bet he doesn’t have the goods.

Look at the link between cannabis and violence, which Sessions takes for granted. “Experts are telling me there’s more violence around marijuana than one would think and there’s big money involved,” he said in February.

But here’s what the data actually show: There is no causal or correlative link between legal cannabis and the violent crime rate.

Let’s Go to the Data

The FBI’s Uniform Crime Report is the gold standard for data on violent crime. According to FBI statistics, violent crime fell by 8% across the United States between 2010 and 2015. That span gives us a pre-legalization baseline (2010) and a fully implemented, all-stores-open year (2015). Full year data for 2016 is not yet available.

#tablepress-83 from cache  (Adult-use cannabis states are in all caps.)

The correlation between a state’s cannabis laws and its violent crime rate is zero. Nada. Null set. It has, to borrow a phrase, ceased to be.

Now let’s take a look at violence that is tied to cannabis. If you’ve been paying attention to the news, you may have caught reference to these recent incidents.

This is what the violence around marijuana looks like, Mr. Attorney General. It’s violence spawned by the antiquated, outdated, counterproductive, unjust and completely unnecessary prohibition of cannabis.

The money’s big, too. Civil asset forfeitures padded the budgets of American police departments to the tune of $5 billion in 2014. As the Washington Post’s Christopher Ingraham noted, that means there was more money stolen by cops, from civilians, than every burglar in every state stole from every victim that year. 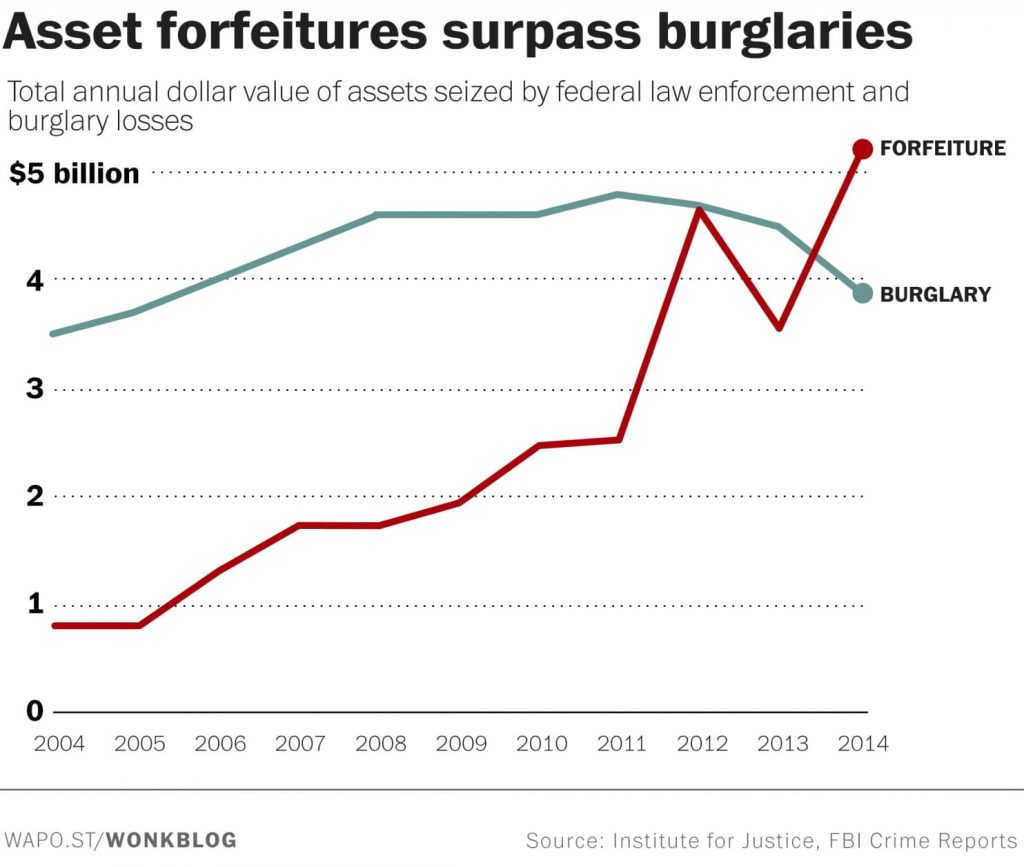 This graph originally appeared in the Washington Post’s Wonkblog column.

Publish the task force report, Mr. Sessions. Show us your evidence. We’re happy to show you ours.

Source: The Haymaker: Why Is Jeff Sessions Hiding His Task Force?